So you’re one of the lucky few this season able to purchase a Wii U. Congratulations! There are some 24 titles set to release alongside the console, and All That’s Epic wants to do your homework for you. Here’s the lowdown on some of the more interesting titles that will be available at launch! 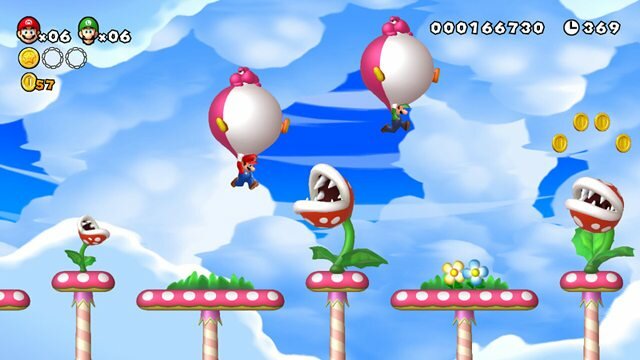 The famed plumber brothers finally make their debut to HD in this installment of the Mario Brothers series. Classic characters Mario, Luigi, Toad and Baby Yoshi must work together to defend their castle and the Princess Peach from Bowser and his Koopa fleet. Up to five players can enjoy this game, four using the classic Wii Remote and a fifth utilizing the new Wii U GamePad to place boost blocks and distract enemies. Find all the familiar power-ups such as the mushroom and fire flower, as well some brand news one, like the flying squirrel suit! There are a lot of other cool features to the new Mario game as well, and we definitely recommend you check it out.

This neat game comes with the premium Wii U bundles and teaches people about the functionality of Wii U and the Wii U GamePad controller. Set in a carnival style world, the game features 12 mini-games based on classic Nintendo games such as the Legend of Zelda, Metroid, Pikimin, Mario Brothers and Animal Crossing, to name a few. Most of the games support up to five players and make use of the Wii Remote and Wii Nunchuk. If you’re getting the premium bundle this will come included, but if not, this is definitely a fun party game to pick up!

Stalk Arkham City and fight classic villains as the Dark Knight in this port to the Wii U. The Armored Edition of Batman Arkham City brings with it all the previous downloadable content including the extra campaign “Harley Quinn’s Revenge” where you play as Robin as he searches for Batman. Also included is Battle Armor Tech mode (BAT mode) which allows Batman to accrue energy during fights. This energy can be released to inflict massive damage. If you haven’t played this fantastic game yet and are getting a Wii U, there’s no better time to pick it up and experience the plethora of additional content.

Just released for the other consoles, Call of Duty Black Ops 2 will be released for the Wii U at launch. The Wii U GamePad controller will be able to display weapons, ammunitions, the map, objective and more. Another neat feature is that instead of having to suffer through the agonizing split screen when playing multiplayer, Wii U users can play one to the main screen and one to the GamePad screen. The temptation to look at the screen of your opponent is a thing of the past with this port. Activision will offer all the standard DLC for the Wii U version as well, including a zombie mode which will either come with the launch or be released later on.

The early bird doesn’t always get the worm, as is this case with this port. Tekken for the Wii U includes a number of awesome features, my personal favorite being the various Nintendo costumes available. The game includes character costumes from Star Fox, the Legend of Zelda series, Metroid, Super Mario and F-Zero. You can play as Bear and dress him up as Mario and make him fight people. This is amazing. In addition to the costumes, Wii U has a couple of modes the other versions do not have in the minigame Tekken Ball and a mode that uses mushrooms from the Super Mario series. This comes on top of all of the DLC already made available on the Xbox 360 and PS3. If you haven’t picked up this game yet, this an absolute steal. If you have already for another console, it still might be worth picking up.

Join up with Mickey Mouse once more as he fights to save the Wasteland, this time alongside his friend Oswald the Lucky Rabbit in co-op mode. Command paint brush and remote control in this epic sequel set to release at launch. Enjoy the myriad of plot relevant musical numbers! If you’re looking for a gift for a youngster in your family, this is a great candidate.

Much like Tekken Tag Tournament 2: Wii U Edition, this will be another game where you’ll be glad you waited. This port of Ninja Gaiden 3 boasts all of the DLC from the previous iterations of the game, as well as new enemies, improved graphics and 1080p compatibility, new weapons, a new upgrade menu and much more. There’s enough change in this version to make it feel like an entirely new, and much better game. One of the biggest changes will be the advent of a co-op gameplay mode, with a new female ninja character, Ayane. There are a lot of reasons to pick up this port!

New Pokemon Sun And Moon Trailer Has Biggest News Yet

Join Maxwell and help him collect Starites through creating various objects in this next installment of the Scribblenauts titles. Not unlike other Scribblenauts games, objects can be created and saved. The Wii U version of the game will be able to save up to 900 custom objects. The Wii U version will also come with a two player co-operative mode, as well as support allowing players to share their custom objects with online friends. Scribblenauts first foray to the home consoles will be available on November 18th, coinciding with the launch of the Wii U.

Disappointed by the lack of a Mario Kart title for the Wii U at launch? Don’t worry, Sonic and his friends have you covered. Sonic & All-Star Racing Transformed continues the proud tradition of mascot racing with a number of updates to the genre. Vehicles will have air and sea modes. Some race tracks will change as players continue racing along them. All-star abilities are earned by performing tracks, rather than getting them through boxes. Available characters are drawn from Sega classics such as Sonic the Hedgehog, Jet Set Radio, Super Monkey Ball, Golden Axe, Crazy Taxi and more. The Wii U version of this game comes with additional minigames for the Wii U GamePad. This will not be a racing game to miss.

In this case, the best has been saved for last. ZombiU, made by Ubisoft takes place in London where something called the Black Prophecy has come to pass and a zombie infection has spread throughout the city. Your character has been chosen by the survivors to go out and combat the spreading infection. The coolest thing about this title is that, if you’re bitten once by a zombie that’s it. Your character is dead, unless a shot of Virucide is used. You’ll be forced to play as a new survivor. If you want your gear back, you’ll need to go into the city and kill your former, now zombified self. This title is a Wii U exclusive available at launch and as cannot be played on any other console. Of all the games coming out, this looks like it should absolutely be the most fun.