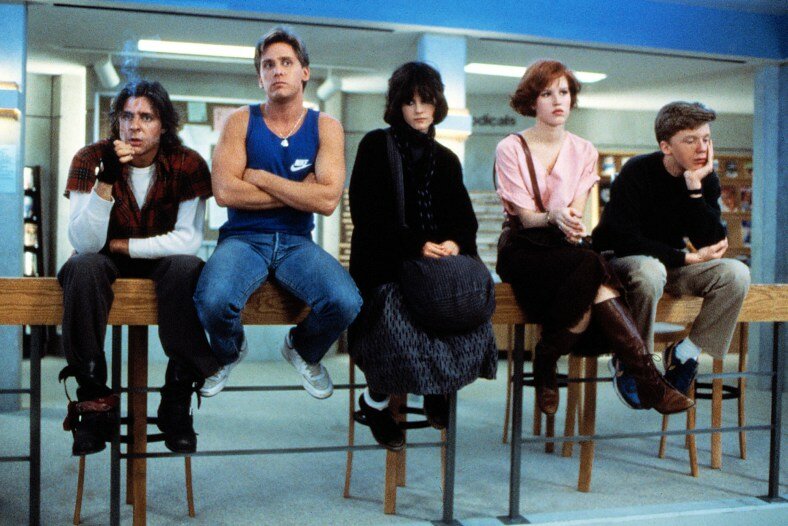 Back to school means the end of lazy summer fun and the beginning of schedules, homework and the inevitable ennui of fall. To get yourself ready for the coming months of backpacks and essays, nurture your inner teenager with these 10 nostalgic back-to-school movie classics. These favorite films from the 80s and 90s are sure to keep you smiling all the way to the classroom.

Samantha Baker (Molly Ringwald) is an awkward high school sophomore whose 16th birthday is turning out out to be a total bust. The entire family is in town for her sister’s wedding, and in the confusion everyone has forgotten about her big day. To make matters worse, Samantha has a crush on the most popular boy in school, Jake Ryan (Michael Schoeffling), and she’s also being pursued by the school’s biggest dork (Anthony Michael Hall). Sixteen Candles perfectly captures all the angst of a coming-of-age high school romance, along with a sweet ending.

In The Breakfast Club, five very diverse high school students are sentenced to Saturday detention under the supervision of a power-tripping principal (Paul Gleason). The “club” brings together the rebel John (Judd Nelson), prom queen Claire (Molly Ringwald), emo outcast Allison (Ally Sheedy), brainiac Brian (Anthony Michael Hall) and Andrew (Emilio Estevez), the athlete. They become unlikely accomplices and develop a new understanding of each other, if only for a day.

In Back to School, self-made “Tall & Fat” clothing mogul Thornton Melon (Rodney Dangerfield) is upset when his soft-spoken son Jason (Keith Gordon) is unsure about finishing college. To set an example, the obnoxious, party-loving dad enrolls in college alongside his son – even hiring others to do his school work. In the midst of his father’s antics, Jason must learn to find his own way at college, and Thornton must prove that he can make the grade.

Ferris Bueller (Matthew Broderick) has become an expert on ditching school without getting caught. With graduation day looming, Ferris and his friends embark on an epic Chicago “sick day” that includes Wrigley Field, a parade float and a stolen Ferrari. All the while, Glenbrook North High School’s bumbling Principal Rooney (Jeffrey Jones) is on a mission to expose Ferris’ subterfuge.

John Keating (Robin Williams) is the new English teacher at a stodgy, all-boys preparatory school that is steeped in honor and tradition. His unorthodox teaching methods inspire his students, but rub parents and administrators the wrong way. Under Keating’s instruction, his repressed students gain the courage to break away from their parents’ expectations and to chase their dreams. Carpe diem!

It’s graduation day and high school senior Lloyd Dobler (John Cusack) has a crush on beautiful class valedictorian Diane Court (Ione Skye). Determined to make his move before it’s too late, Lloyd works up the courage to ask Diane out. To the chagrin of her possessive single father (John Mahoney), Diane returns Lloyd’s feelings and they quickly fall in love. As college plans and family loyalties threaten to divide them, the couple must decide whether love really does conquer all.

In this fun, lighthearted comedy, ditzy Beverly Hills teenager Cher (Alicia Silverstone) is at the top of her high school’s food chain. Casting herself as the matchmaker, Cher orchestrates a love connection between two teachers. She then resolves to make over a frumpy awkward new girl, Tai (Brittany Murphy). When Tai takes Cher’s place in the pecking order, Cher realizes that she has created a monster. Enlightened by her down-to-earth ex-stepbrother (Paul Rudd), Cher learns to be more self-aware and finds love in the process.

It’s time for their ten year high school reunion, but best friends Romy (Mira Sorvino) and Michele (Lisa Kudrow) haven’t exactly accomplished much. Determined to impress, the two decide to reinvent themselves as successful business women who “invented Post-Its.” When their lie gets out of hand, Romy and Michelle must learn to appreciate who they truly are.

With graduation looming, a group of male friends makes a pact to lose their virginity. Through a series of mishaps and misfires, the guys manage to make the rite of passage to adulthood with their friendships intact.

Tracy Flick (Reese Witherspoon) wants to be class president, and she will stop at nothing to win the election. Disapproving of her cutthroat tactics, Government teacher Jim McAllister (Matthew Broderick) recruits a popular simpleton to run against her. When Jim takes extreme measures to affect the outcome of the election, a bitter rivalry ensues that threatens to destroy his life.

Josie Geller (Drew Barrymore) is a budding journalist the Chicago Sun-Times, enlisted to go undercover as a high school student for an important article. Despite her past as a social reject (“Josie Grossie”), Josie finds her place as one of the popular girls. When she falls for her English teacher, Sam Coulson (Michael Vartan) things get complicated.

What are your favorite back-to-school movies from the 80s and 90s? Chime in below!