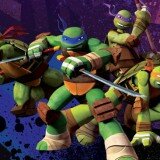 In season two, long-time TMNT villain Pizza Face will make an appearance. As the premiere episode of season two of TMNT was shown during the panel, the audience witnessed Pizza Face take over the bodies of ninja turtles Ralph, Leo, and Don and forced them to fight their brother, Mike. As Mike defends himself against his possessed brothers, he says, “Sorry, Don! Sorry, Leo!” But as for Ralph, he gives a “Not sorry, Raph!” It appears as though the second season of TMNT will be action-packed, as always, while still having the not-so-serious brotherly banter.

Big news was also released as Ciro Nieli, executive producer, confirmed that the 1980’s version of the turtles would be making a cameo appearance sometime in the season, which is sure to please the older generation of TMNT fans.

Check back for more Teenage Mutant Ninja Turtles and New York Comic-Con news as we will be providing you with weekend-long coverage of the big event!

New ‘American Horror Story’ Season 6 Teasers Give Nothing Away