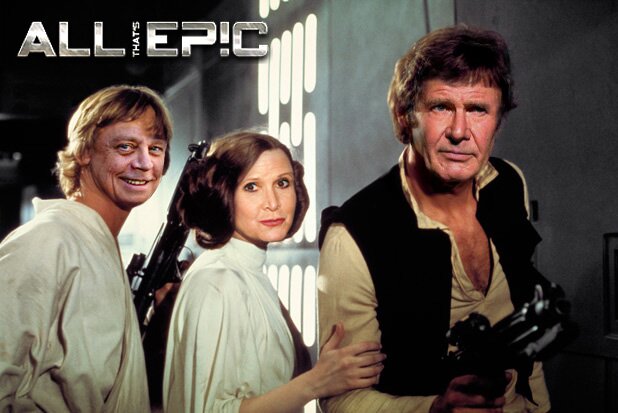 Last week, Disney announced that they have acquired LucasFilm for $4.05 billion, and will be producing several new Star Wars films, beginning with Star Wars: Episode 7 in 2015. Now, EW.com reports that Harrison Ford may be ready to dust off the old vest and blaster and play Han Solo again!

“Harrison is open to the idea of doing the movie and he’s upbeat about it, all three of them are,” the website quotes an unnamed source, referring of course to Ford, Mark Hamill (“Luke Skywalker”), and Carrie Fisher (“Princess Leia”). Chewbacca had no comment.

Ford, who is now 70, catapulted to fame after appearing in the epic space trilogy. He went on to star in such blockbusters as Blade Runner, The Fugitive, Presumed Innocent, Clear and Present Danger, and many more. He is perhaps most famous for playing our favorite archaeologist Dr. Henry “Indiana” Jones in the four Indiana Jones films, another franchise that was included in the massive Disney buyout.

What exactly would it take to entice Ford back for another Star Wars sequel? In 2010, Ford confessed in an ABC interview that the Han Solo character was “not so interesting to me.”  The original plot for Episode VI: Return of the Jedi was to include the death of Han Solo, but was reportedly changed because Han Solo was raking in the big bucks as an action figure.

At this point, we know next to nothing about Star Wars: Episode VII, and are left to our own colorful guesswork. It is completely unconfirmed whether the script will even include any of the original characters. We’ll be sure to keep you posted on developments as they become available.

Which characters would you like to see in the upcoming Star Wars sequels?