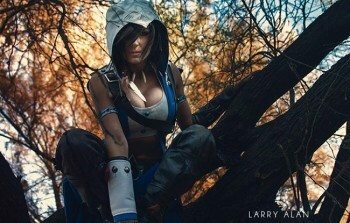 Women rule the world, and cosplay is no exception. But let’s face it, sometimes the guy characters have more exciting adventures and better weapons. With a little gender swapping and creativity, though, the girls can have just as much fun as the boys.

We’ve pulled together the following collection of some our favorite female versions of male video game characters. These powerful and sexy female cosplayers prove that they can fill a man’s shoes..and then some.

Kratos from God of War