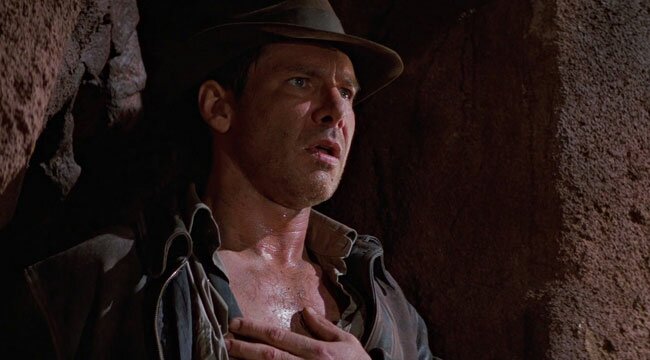 Can you believe it? Indiana Jones 5 is happening, and both Harrison Ford and Steven Spielberg will be back for the famed archaeologist’s new adventure! That fact in itself is an inspiration, and is cause for reflection. What other inspirational moments has Indiana Jones given us? Whether he’s watching faces melt, drinking from the Cup of Christ, thwarting the plans of an evil cult, or witnessing the travel of interdimensional beings, the man has done, and said, a great many things that can inspire.

But Indy isn’t the only one in the series to deliver some poignant one-liners. His friends, and occasionally even his enemies, are just as capable of enriching our lives through their spoken words. So, get cozy and prepare for emotional and spiritual enlightenment as we look at seven inspirational quotes from the Indiana Jones Quadrilogy, and the lessons they can teach us.

“You lost today, kid. But that doesn’t mean you have to like it.” – Garth, Indiana Jones and the Last Crusade

Look, let’s be real here. Nobody likes to lose, and that’s normal. But too often, loss is associated solely with the negative. Losing sucks, but every loss, mistake, and failure can be the first step on a path that leads to success.

For this principle in action, look no further than young Indiana Jones. He came so close to claiming the Cross of Coronado for himself, but in the end, he had to hand it back over to the man in the fedora, Garth. Indy’s archaeological career could have ended right there, had he given up after his loss. But instead, he persevered and became the legend we know today.

“I don’t know, I’m making this up as I go.” – Indiana Jones, Raiders of the Lost Ark

We all have hopes and dreams, and for the lucky few, their lives pan out just the way they want it to. They make a plan, and by some miracle, everything goes according to it. But for most of us, this just isn’t the case. Indy is as real as he can be when he tells us that, despite our best laid plans, sometimes, we just need to take what life gives us, and make up the rest as we go along.

“I’ve followed you on many adventures…but into the great unknown mystery, I go first, Indy!” – Wu Han, Indiana Jones and the Temple of Doom

Wu Han is Indy’s sidekick for the opening Club Obi-Wan scene of Temple of Doom. Unfortunately, he met an untimely death after being shot by Lao Che’s son, Chen. But his final words are full of hope, rather than fear. Instead of being frightened of what waits for us after death, Wu Han embraced his fate, accepting death as just another adventure to be had. Perhaps all of us could treat life’s inevitable conclusion in the same way

“Only the penitent man shall pass.” – Henry Jones Sr., Indiana Jones and the Last Crusade

We all make mistakes. It’s a fact of life. But how we treat ourselves, and especially others, after we screw up can define us. Faults can be forgiven, but rarely can wounds mend without apologies and restitution being made.

Sure, we could go through our entire lives screwing people over, burning bridges, and ruining relationships. But there is no happiness with that paradigm. The penitent, as well as the forgiving, are those who will pass through life effectively.

“How much of human life is lost in waiting?” – Harold Oxley (original quote by Ralph Waldo Emerson), Indiana Jones and the Kingdom of the Crystal Skull

Whether it’s one of those brief moments of motivation that quickly fly past us, whether it’s love, or whether it’s an opportunity just itching to be seized, don’t wait! Don’t waste your life compiling a list of regrets and missed opportunities.

In my own life, before letting something pass me by, I always ask myself, “will I regret it later if I don’t do this thing?” And if the answer is affirmative, then I do the thing. It’s a simple principle of action, but one that is ignored all to often.

“It’s time to ask yourself what you believe.” – Walter Donovan, Indiana Jones and the Last Crusade

This statement doesn’t just apply to Presidential elections. Throughout life, our morals, beliefs, traditions, and values can all be challenged. The ignorant person will take no thought or consideration of the challenge, and will simply believe, and often state, that they know what is right, simply because that’s what they are used to.

I’m not saying that their point of view can’t be the right one. However, it would benefit us all to obtain the talent of being able to see all situations from different sides, and different points of view. The foolish are prideful and unwilling to consider the thoughts and feelings of others, and the wise seek every opportunity to seek out understanding, and even challenge their own beliefs when the situation calls for it.

Speaking of being wise, this gem is about the simplest advice that one can give, but perhaps the most difficult to follow.

Not all poor decisions will result in rapid aging, leading to our skeletons being blown apart. In fact, that fate might be reserved solely for Donovan. His selfish desires and false notions led him to be foolish, which then led to him being dead.

But our indiscretions can cause us misery. In all situations, we must seek to be wise. This statement encompasses all the other quotes on this list. The wise will be penitent, considerate, proactive, and optimistic. Indeed, the wise will be just like our favorite fedora-wearing professor, Indiana Jones.