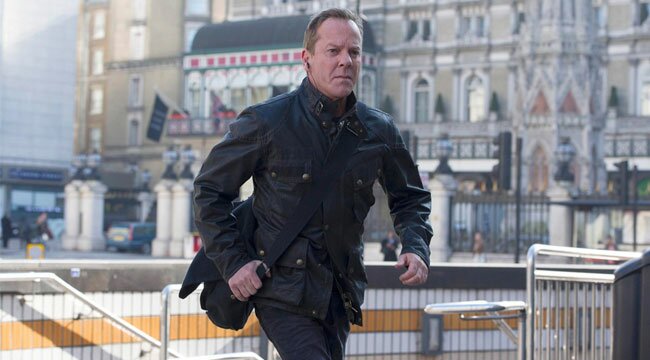 24 has always been a show that existed in acts comprising each season, marked by culmination or neutralization of each successive terrorist threat or conclusion of major subplot. I’m confident that, with a third of its season behind it, Live Another Day has come to the end of its first unofficial act. It may be that once Al-Harazi’s hijacked drone attack is underway and Jack races to stop it that the actual end of the first act will come later and eventually give way to an even more insidious plot involving a shocking mole.

At any rate, the end of hour four did feel like the end of a mini arc with all of the players and scenes intersecting neatly and coherently when President Heller called Jack Bauer. After “barely grazing” two protestors outside the embassy to incite a riot and give himself an opportunity to break in, Jack finds the room where the suspected rogue drone pilot Chris Tanner is being held. He tells Tanner that he believes him, that he knows who hijacked his drone and how, and that he needs Tanner’s flight key to prove his innocence and to stop a further drone terrorist attack scheduled for today.

Tanner agrees to tell Jack that one of the guards has his flight key on him when Jack says that he’s the only one who believes him and he’s his only chance to clear his name. Jack tries to escape the embassy, but by then CIA agents Ritter and Morgan have alerted the marines and the building is locked down tight. So instead, Jack finds a secure communication room, takes three embassy workers hostage and barricades himself in, buying himself and Chloe time to decrypt the flight key and extract its records which their own analysis will hopefully prove the hijacking.

Adrian Cross seems just as intent on standing on his principles as Jack is. With Chloe committed to helping Jack get Heller the intel, Adrian still takes his sweet time getting Jack exactly what he needs. Chloe is catching on after Adrian arranged Bauer’s original security clearance for the embassy to flag him for security. When she confronts him, Adrian says that his mission is to expose government secrets, not help contain them. Fair enough, Adrian, but if you get over yourself enough to not deliberate screw Jack over you could earn some major brownie points with the viewers.

Adrian asks about Chloe’s unwavering loyalty to Jack, why is she so devoted to him, he asks. Chloe doesn’t give a verbal answer, just looks at Adrian with frustration. We know that Chloe and Jack have more of a history than anyone else in the show’s cast and that Jack’s convinced her to help get the intel to Heller, but it seems like the four year hiatus has given Chloe time to think about what she’s done and what she wants for herself. We’ll see where this goes.

Jack is prepared to die to deliver the intel. To give the CIA and the marines assembling outside his room some pause, he has one of the hostages momentarily open the door and he plugs two marines right on their body armor. After that, the marine captain is all but gunning to take Bauer out at the first chance they get.

Back at the Houses of Parliament, and perhaps to the surprise of every one attending, President Heller has managed to rally the politicians back to an attitude of understanding and cooperation. Audrey is glowing at her father’s save when Mark Boudreau steps in and finally tells both Heller and Audrey that Jack Bauer is back, that he’s taken hostages at the American embassy. Audrey asks immediately how long Mark has known Bauer was back to which Mark gives a shifty, “I was assembling all the facts”. Heller decides to talk to Jack himself, despite Mark’s protests.

Meanwhile, back at the Al-Harazi house, Simone and Naveed are still tense over Naveed’s role in the coming terrorist attack, beneath their modesty bed sheet. Naveed reveals that he has a plan to escape, he and Simone both. Simone says she’ll go with him, but in the next scene in the kitchen with her mother, she tells her about Naveed’s plans. The hissing tea pot in that scene was a nice setting reflection of the rising suspense and Margot’s firm lecture about duty at any cost.

Margot wastes no time. She, Simone and two of her cronies come to Naveed’s room and Naveed immediately surmises that Simone blabbed. Margot gives him once chance to promise that he will carry out the drone attack like he agreed, reminding him that no one is innocent, including ordinary people who elect warmongers and mass murderers (like President Heller). Naveed says that’s insane and that there’s nothing she can do to him to make him go through with it. Margot has her play prepared. She knows that Naveed and Simone love each other, so instead of torturing Naveed, Margot has her thugs restrain Simone while they cut off her pinky finger with a mallet and stake. Ew. Naveed capitulates.

Heller finally gets through to Jack with Audrey, Mark and Agent Morgan and Chloe all listening in. Bauer is clearly taken by surprise, not expecting the President’s direct attention, but he jumps on the opportunity. He tells Heller exactly what he’s up to and why he’s done what he’s done and about the drone hijacking terrorist plot. Heller asks Jack why he didn’t come to him first, to which Jack says, with all due respect, that Heller’s administration branded him a criminal and that he knew he would never be heard unless he had proof first, so here we are.

Heller hangs up. Right away Mark says that he doesn’t believe Jack, that Jack must be working with Open Cell, since he broke Chloe out and that this story is likely a cover for Jack to release more government secrets like Open Cell has done before. Audrey is outraged at this suggestion. Mark reminds Heller that, before Jack disappeared, he went on a killing spree and nearly assassinated the Russian President. Not to mention, he continues, looking at Audrey, the emotional destruction her leaves in his wake. Heller agrees to let the marines move on Jack and take him out.

Agent Morgan overhears Jack’s conversation with the President and starts connecting the dots. She pleads with her superior Navarro to overrule the marines and negotiate with Jack herself, but Navarro’s hands are tied. Morgan creeps into the vent over Jack’s room, but Jack hears her and fires a shot into the vent, spooking Morgan to reveal herself. She says that she’s unarmed and that Jack has to surrender herself to her for him to have any chance of escaping and delivering the intel. Why should I trust you? Jack says. Because I’m the only one who believes you. When the marines blow the door, Jack is under Morgan’s heel. It’s a bit of a standoff but the marine captain tell his men to stand down. Ritter lends Morgan his cuffs and apprehends Jack, finally being taken in in a way that he didn’t intend. The upload of Tanner’s drone flight key to Open Cell is still underway.

We learn that Margot is not above mutilating her own daughter to accomplish her goals. Simone certainly wasn’t expecting that. Margot must really need Naveed to pilot those drones. I don’t think she would have hurt Simone like that if she felt she had a viable alternative; I don’t think she’s that callous about her daughter. How big a wedge will this drive between Simone and her mother? She was basically punished for being loyal and revealing her husband’s plot to escape. Will Simone get the opportunity to turn that back on Margot at some point? Will she want to?

Our introduction to Simone was that she was likely every bit as conniving and single minded as her mother, but Margot is truly ruthless. Simone may think twice about Naveed’s plan for them to escape. We didn’t get to see any follow up at the Al-Harazi house so we’ll have to wait for the next episode to see what the fall out form this move between mother and daughter will be.

Heller talking to Jack was a satisfying, effective scene to bring all the players together around one event. Jack told Heller that felt betrayed after everything he had done but still he’s still protecting the United States and swears to Heller that he’s always told him the truth. Heller’s been such a sentimental and sympathetic character that I almost expected him to believe Jack right away. But of course that would have been too easy this early in the season.

And HOLY HELL do we hate Mark Boudreau. How big of a ditch in our sympathies is he going to dig himself? Immediately suspecting Jack of lying to Heller? How selective memories everyone in executive office has on 24. This level of audience hate almost certainly means that Boudreau is not going to be an actually bad guy, though. Now that Audrey knows Jack is back and Mark kept his reappearance to himself, their rift is sure to widen. There’s still the business of the forged executive order to hand Jack over to Russia. Now that Boudreau has an even bigger taste of Jack’s presumed treachery, he’s surely not going to give up on that contingency.

The preview for hour five showed Heller and Jack talking in person, discussing sending Jack out into the field again. A bold proposition to be sure, given what Jack’s already done in London. But, of course, that moment will be when Heller realizes that he needs Jack doing what he does more than he needs to make Jack accountable right now. Hopefully Jack and Morgan will be able to work together at last. Might we hope that Jack and Audrey will get the chance to speak, however briefly? Not if Mark has anything to say about it, I wager.

The twelve episode format is certainly helping the show stay focused and keep all its scenes and players directly tied to the main arc, as opposed to one or two inane minor plots that only tangentially tie to the main arc, like previous full 24 seasons had. It was also good to see this episode keep up the intrigue and suspense with personal tension and with Jack trapping himself while the marines and CIA close in. The episode let the action punctuate the tension when it appropriately boiled over instead of the action taking up the bulk of an episode with sparse moments of down time or quiet unease.

So, will Simone start to question her devotion to her mother? Will Margot be able to restore her daughter’s trust? Will Jack’s decision to trust Morgan pay off? Will Chloe keep helping Jack even now? And just how drastic is the drone hijacking going to get before Heller lets Jack lose again? Stay tuned next Monday for what may be the next act of ‘Live Another Day’ and for our review!