AMC’s Fear the Walking Dead is right around the corner, which means it’s time to take a trip down zombie-apocalypse memory lane. With season six of The Walking Dead set to arrive in October, let’s take a look at some of the show’s most brutal, emotional and indescribably epic moments.

Warning: Major spoilers ahead for seasons one through five, so read at your own discretion.

Rick guns down a zombie girl 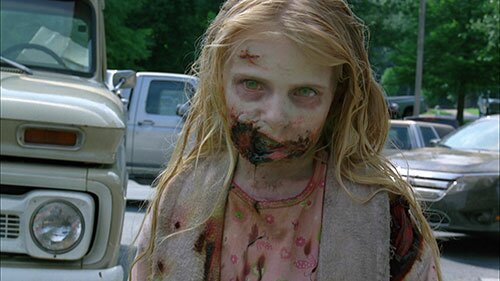 Let’s start off with the show’s very first scene. Right from the start, series developer and original showrunner Frank Darabont established the tone of this show and that no one in it is safe. The first walker killed isn’t a disfigured man who may have been a criminal before the outbreak, but rather a reanimated little girl whom Rick has no choice but to put a bullet through her head.

I still remember the shot as this seemingly innocent girl turns around to reveal her blood soaked face and how all remnants of humanity have left her. It’s one of the best intro scenes in recent years of television dramas and provides merely a taste of the shocking material which pervades throughout the series. 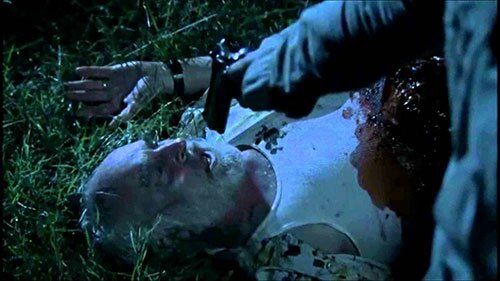 It’s been a while since we’ve seen Dale, but this character’s death toward the end of season two remains one of the most emotional in the entire series. After an escaped walker finds Dale in the woods one night, it not only bites him but opens his stomach. When the team finds him and sees that he is beyond saving, Daryl says a heartfelt “Sorry, brother” before putting him down with a handgun.

Dale was the Obi-Wan like mentor who held the group together throughout the first couple seasons, so losing him was a hard one for fans to swallow. Beyond this, the walker that killed him is one which Carl failed to kill earlier in this episode. While no one can blame him for what happened as he was just a kid at the time, this incident no doubt scarred him. 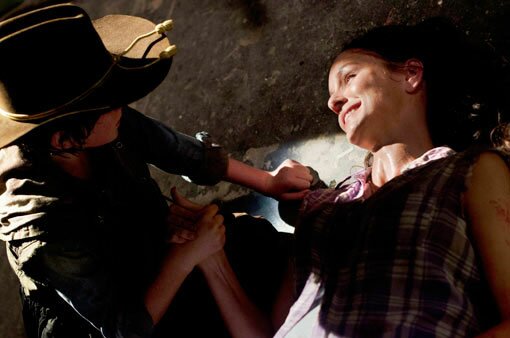 While this death was quite a relief for fans, it’s still brutal. Everyone wanted Lori to go, as she was at the forefront of the soap opera drama in earlier seasons. Still, watching her die from a C-section in order to give birth to Judith, and then seeing Carl being the one to shoot her before she could turn, evoked an emotional response from every viewer. 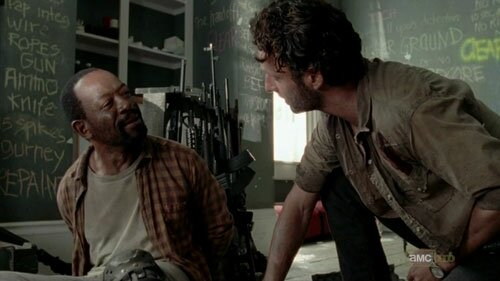 In “Clear”, one of the best episodes to date, Rick reunites with a now isolated Morgan Jones. Locking himself in an abandoned police station in Rick’s hometown, Morgan (played to perfection by Lennie James), is all but gone mentally. He reveals to Rick at the end of the episode that he was unable to kill his walker wife, who eventually killed his son Duane. This trauma of course pushed him to the brink of insanity.

The timing of this episode is perfect, as Rick had just lost Lori. The tragedies which both he and Morgan suffered paves the way for a real emotional connection between the two, and this is made all the better by James’ and Andrew Lincoln’s stellar performances. 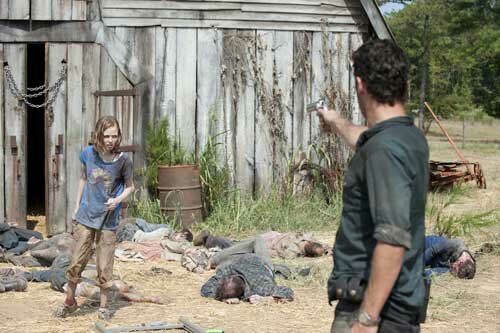 After half a season of the group searching for Carol’s missing daughter Sophia, they at last find her already turned inside the barn of Hershel’s farmland. We learn that Hershel had been keeping a swarm of walkers locked in there, his wife among them, as he believed he could save them. Unbeknownst to him, Sophia was one of them.

The most significant aspect of this scene is what it does to Carol. In season one she was portrayed as a helpless victim living in fear of her abusive husband. Now she rivals Michonne in terms of most intimidating character, wielding a rocket launcher at one point in season five and allowing unarmed opponents to die. It’s undeniable that seeing her only child transform into a walker left a scar which never healed. 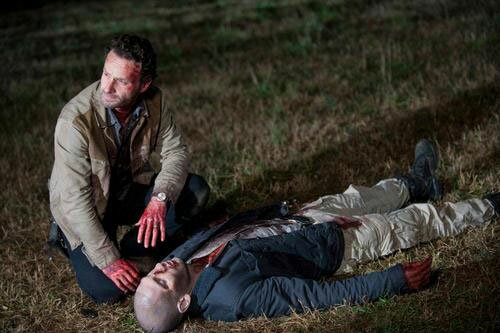 The show ended up keeping Shane around slightly longer than the comic, but regardless his death was inevitable. While the season as a whole was relatively weak compared to others, it did deliver a climactic finale as the rivalry between Rick and Shane came to a bitter conclusion. After Shane pulled a gun on his best friend, Rick had no choice but to take him down, followed by Carl shooting Shane’s reanimated self. This then lead to the father and son discovering a hoard of walkers nearby who then attacked the farm and forced the group to relocate.

This remains one of the better season finales in the show, especially since the season three one was rather bizarre and anticlimactic. Though many fans never really liked Shane, the show did an excellent job evolving him and developing the tensions between him and Rick. Furthermore, Jon Bernthal’s performance has me stoked about him playing Punisher in Daredevil next year. 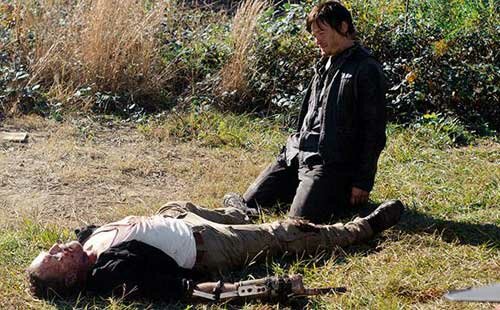 This is the only scene I can recall where Daryl actually sheds several tears, and rightfully so as he discovers that his brother Merle is gone and has already turned. Not long after switching sides, Merle makes the ultimate sacrifice by attempting to take out The Governor himself before things get any more tense and ends up getting killed in the process.

Merle was always the easiest character to hate. He was a racist, a redneck and not long before renouncing The Governor helped him put Glen and Maggie through hell when they were their captives. Yet despite all that, he did redeem himself in the end, and Daryl’s weeping for him remains one of the more powerful moments yet. 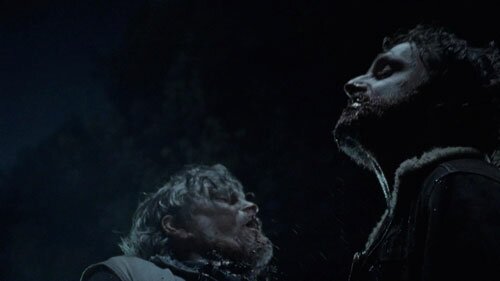 Rick has had a complicated evolution. One minute he’s a ferocious dictator of a leader, and the next he tells the team to put a major decision to a vote. And while he had already killed men when absolutely necessary in earlier seasons (i.e. Shane), no one could have foreseen how unrestrained his violence would become by the end of season four. In the season finale, he, Carl, Michonne and Daryl encounter a gang of bloodthirsty men out to get revenge on Daryl for abandoning them. When they do unspeakable things to Carl, Rick loses it and lashes out at the group’s leader, viciously biting his neck.

It’s one of the most bloody and electrifyingly intense moments in The Walking Dead, as it shows just how far the once law-upholding Sheriff has come in the wake of the apocalypse. It brought out a new Rick who no longer hesitates to kill when an outsider threatens his people, and who continues to show no mercy in season five during a brutal church massacre scene.

“Look at the flowers” 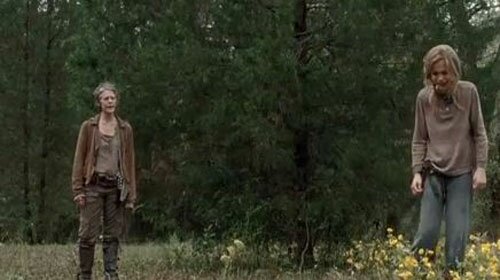 By season four, viewers had already seen kid walkers get shot, but up until this point there hadn’t been a human child which someone was forced to kill. Here though, after learning that her surrogate daughter Lizzie had gone insane and killed her sister, Carol had to protect the others and put the girl down, telling her to turn around and look at the flowers as she fired the bullet.

As one of the most shocking moments in really any modern TV show, this scene has of course inspired countless memes. It makes sense as the only way to cope with how terrifying it is is to make jokes about it. Still, this one will forever be remembered as one of the show’s true horror sequences.

With the aforementioned barn incident in season two, Hershel wasn’t an easy character to like at first. As time went on though, he got past his crazy stage and came to take Dale’s place as the group’s mentor. That said, watching The Governor chop his head off using Michonne’s katana in season four was brutal. This paved the way for an epic battle scene at the prison in which Rick and Michonne each got their slice of The Governor as they finally took down their one-eyed nemesis.

Just before this showdown, all evidence pointed to The Governor turning over a new leaf. A story arc devoted to him featured him falling in love and seemingly renouncing his infamous title. However, showrunner Scott M. Gimple and the other writers merely did this to tease fans, as the events of this episode show. Still, I like how they made this character more realistic and showed different sides to him. The comic portrays him as a one-dimensional sadistic maniac who’s impossible to empathize with. Props to the writers of the show and to actor David Morrisey for giving him more depth.

Conclusion: There are plenty of other great moments in the show too: Beth’s death, the “Guts” episode in season one, the season five finale and many more. So if you’re still craving more of this universe, there will be plenty of walkers to fill your zombie appetite come this fall.

What are your favorite Walking Dead moments? Sound off in the comments! 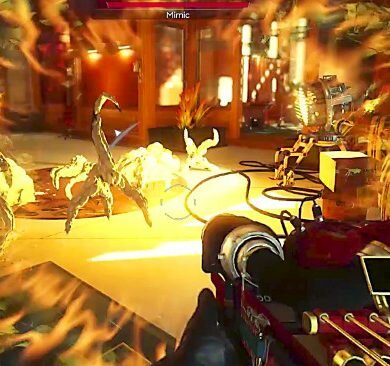